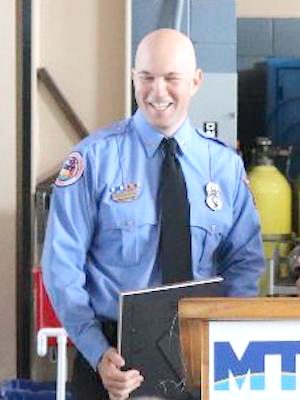 Andy Pumayalla and Anthony Torres received $500 each on Jan. 24 at the school in a ceremony marking the establishment of the scholarship.

“So we started the scholarship in his name, not my son’s, to inspire the students (at the Fire Academy).”

The scholarship was the way the Beyrootis said they could acknowledge Smail’s quick response.

“I wasn’t looking for any recognition,” he said. ‘I just did the right thing.”

On Dec. 15, 2018, Smail and his family were in their car, stopped in traffic when a driver of another vehicle crashed into the car behind Smail, which the Beyrootis’ two sons, Seth and Jayden, occupied.

Smail’s car and the car Beyrootis’ sons were in, both caught on fire immediately.

“His parents were in the first car, he and his family were in the second car, and my sons were in a smaller vehicle behind Richard when the other car crashed into them without stopping,” Beyrooti said.

“Richard saved his family and then went straight away to pull my sons out of their car,” he said. “He was amazing.

“We don’t know what would have happened if there wasn’t a trained firefighter like Richard there,” Beyrooti said. 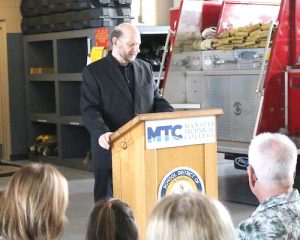 PROVIDED PHOTO
At the ceremony to present checks to the first recipients of the Richard Smail Jr. Scholarship Fund, Craig Beyrooti urged the audience to not be distracted by a cell phone while driving. Beyrooti and his wife Monica donated $10,000 as seed money for the scholarships to help students of the Manatee Technical College Fire Academy with their expenses. The scholarship is named after North River Fire District firefighter Richard Smail Jr, who rescued Craig and Monica Beyrooti’s son Jayden from a fiery car crash in 2018. The driver of the vehicle that crashed into Jayden Beyrooti’s car was said to have been on his cell phone when he failed to stop.

Unfortunately, Seth Beyrooti, 25, was unconscious when he arrived at the hospital and died the next day from injuries sustained during the accident.

His brother, Jayden Beyrooti, 22, also was unconscious when he was taken to the hospital.

“Jayden had a rough recovery and was in a wheelchair for four months,” his father said, “but we have him, and we’re eternally grateful.”

Smail said his quick response to the situation that day was because of his training.

“When the accident happened, I went through a check list in my head,” he said. “I made sure my family was safe, then went back to the car behind me.

“I think the training had a lot to do with it,” Smail said. “I didn’t really think about it; I just went through the progression of the check list as I was trained.”

Smail is a driver engineer at North River Fire District Station No. 4 on U.S. Highway 301 near Colony Cove.

He attended the Fire Academy at Indian River State College in 2006 and after graduation volunteered at the Martin County Fire District for two years.

Smail’s first paid job was with the Sarasota-Bradenton International Airport Fire Department. He was hired on at North River Fire District in July 2014.

After Smail returned to his firehouse, his union representatives and fellow firefighters reached out immediately to see what he and his family needed. 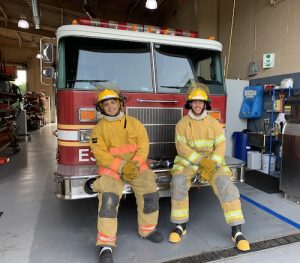 “We didn’t need anything, so I told them if they’re looking to give a donation, to give it to the Beyrootis,” he said. “They raised $1,000.”

Since the accident Smail said he keeps in touch with the Beyrootis’s, especially Jayden.

“I wish I could have met the Beyrootis’s in different circumstances,” he said. “They are really a great family.”

The Beyrootis gave $10,000 as seed money for the scholarship fund to raise awareness of the work the Fire Academy does in training future firefighters. They hope the community will continue to contribute to the fund to help other students get through school.

For Pumayalla and Torres, the first to benefit from the Richard Smail Jr. Scholarship Fund, the money will be put to good use.

“I have some savings, but this really helps,” said Torres, who started at Manatee Technical College shortly after graduating from Manatee High School in May 2018.

Pumayalla also said the money will be helpful in paying for his school expenses.

He lives in Miami and travels back home on weekends and school breaks.

“It takes some of the stress off me, so I can focus on my classes,” Pumayalla said. 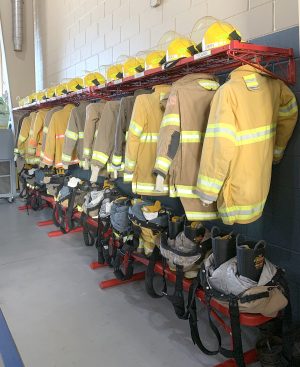 Having already earned his paramedic certification, he hopes completing the Fire Academy courses in firefighting will increase his chances of being hired at one of the Miami fire stations.

Pumayalla knew he wanted to be a paramedic/firefighter from a young age. “When I was 10, my grandfather had a stroke,” he said. “It was then I decided I wanted to be able to help people in that situation. I always wanted to make a difference,” Pumayalla said.

Becoming a firefighter was not the first career choice for Torres. “I took the medical program in high school,” he said. “I wanted to go into nursing originally, but it was a very competitive field.”

He looked into the various medical classes offered at Manatee Technical College and decided to get certified as an Emergency Medical Technician (EMT).

Torres then chose to continue his education at MTC Fire Academy, located on the East Campus at 5520 Lakewood Ranch Blvd., to earn his paramedical/firefighter certificate. “At first, I was reluctant,” he said, “but I fell in love with the Fire Academy.”

Pumayalla, Torres and the rest of their classmates graduate on Feb. 13. Their futures in fire sciences look promising. “The MTC Fire Academy has a success rate of 94 percent of our students taking the State Standards Test and passing,” said Bill Kebler, lead instructor at the academy.

This fact is impressive, considering that the academy requires the students to have a 75 percent grade average, 5 percent higher than the state standard, Kebler said. Setting the bar higher gives the student an edge in passing the state exam, he said. 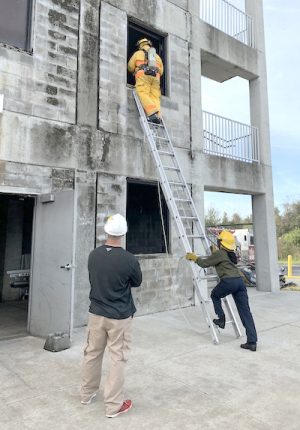 The Firefighter I and Firefighter II Program is a 538-hour course and attending classes fulltime can take four months. Add the required 300 hours of classes for Emergency Medical Technician course, and the fulltime student will be in school for another four months.

These and additional courses are taught in the classroom with lab hours and in the field with practical hands-on rotations, such as hazardous material handling, wildland fire suppression and building search and rescue, that need to be completed.

Several fire districts also are now requiring their firefighters to be paramedics. That course would take a student another 1,100 hours to complete.

The classes start every January and August on a rotating basis and can have up to 20 students. Kebler said there are enough jobs for the number of students graduating from the Fire Academy.

The Fire Academy started in 2000 in the small engine repair classroom at the original 34th Street West MTC main campus, which has since been demolished. The classes then moved to the Bradenton Fire Department Station No. 3 and North River Fire District Station No. 2, until new facilities were opened at the East Campus in December 2007. 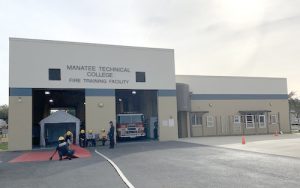 The MTC Financial Aid Department administers the Richard Smail Jr. Scholarship Fund. Students have to submit two letters of recommendation and provide written responses to three statements: Give a brief description, with examples, to demonstrate your own positive work ethic; What are your future educational and/or vocational plans? and Briefly explain why you have chosen this field.

A committee reviews all the applications, looking at the good character, the compassion, and the drive to succeed of each applicant.

Anyone wishing to donate to the scholarship may write a check payable to Manatee Technical College, and put Richard Smail Jr Scholarship in the memo line.

To learn more about Manatee Technical College Fire Academy, check out the website at www.manateetech.edu.